The name Purwanto is well known in the history of Indonesia’s military occupation of East Timor. In 1983, Colonel Purwanto, then direct commander of Indonesian forces in the territory, represented Indonesia in negotiations with Xanana Gusmao, the commander of the East Timorese resistance army, Falintil.

When a retired Colonel Gatot Purwanto made international news in late 2009 admitting he was a member of the Indonesian military team responsible for killing the ‘Balibo Five’ journalists in October 1975, most assumed this was the same Colonel Purwanto of 1983 negotiations fame.

Australian researcher Ernie Chamberlain believes there are two different Purwantos – though, confusingly, both were involved in different roles in the 1983 negotiations. He writes:

‘Major (Kopassus) Gatot Purwanto did the “leg work” in late 1982 and early 1983 in preparing the March 1983 ABRI-Falintil ceasefire talks at Lariguto – while Colonel Purwanto (Danrem 164) was the Indonesian military’s principal in the discussions with Xanana Gusmao.

‘Colonel Purwanto (Danrem 164, Artillery) – somewhat “tubby” and “moustachio-ed”, is seen in the 1983 “Lariguto photographs” with Xanana Gusmao. Major Stefanus Gatot Purwanto – as a Colonel, became the ASINTEL Kolakops/Komandan Satgas Intel in Timor Timur in 1990 – and was dismissed/pensioned from ABRI following the 1991 Santa Cruz massacre. 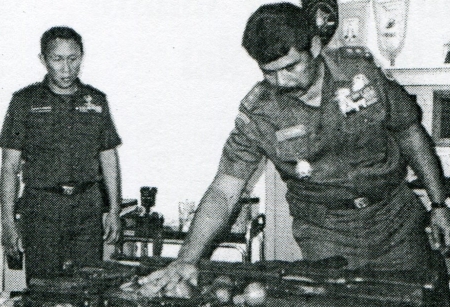 ‘Interestingly, in December 2009 during his interviews related to the film “Balibo”, retired Colonel Gatot Purwanto – aged 62, claimed that at the time of the “Balibo incident” in mid-October 1975, he had only been out of AMN Magelang – the ABRI officer academy – for three years:  “I was a first lieutenant at the time, just three years out of officer training school”, he recalled.  However, according to other reports, Gatot Purwanto graduated from AMN Magelang in 1968 (the same year as Wiranto – born in 1947). Also, in Hendro Subroto’s 2009 book on the career of Major General Sintong Panjaitan, a Captain Gatot Subroto is noted as a Kopassandha intelligence officer on operations in West Kalimantan in 1973. The foregoing suggests that perhaps Colonel (Retired) Gatot Purwanto’s December 2009 statement on his seeming ‘junior status’ at Balibo in 1975 requires some further examination.’

Danrem is the Komandan Korem ie the Commander of the Military Regency/Sub-Area Command (ie Timor Timor was Korem 164 – established March 1979). “Dan” is for “Komandan” and “Rem” is for “Resort Militer“.

ASINTEL is “Assistant for Intelligence” ie a staff officer on a headquarters responsible for the intelligence function.

Kolakops is “Komando Pelaksanakan Operasi” – ie “Executive Operational Command” – ie a special operational command set up in East Timor (commanded by a brigadier) to manage tactical field operations with the Danrem 164 (a full colonel appointment) being responsible for administration and territorial operations. Kolakops was founded in Timor in 1989 and functioned until 1993 – ie disbanded following the investigation into Santa Cruz. However the operational command appears to have continued covertly from outside Timor ie with “guidance” from Kopassus Group 3 Headquarters in Batujajar, West  Java. Of course, many of the Danrem Colonels in East Timor were Kopassus officers.

Kopassus is Komando Pasukan Khusus –  Special Forces . Originally known as RPKAD – Resimen Para Komando Angkatan Darat, then changed to Kopassandha (Komando Pasukan Sandi Yudha) on 17 February 1971, before becoming Kopassus on 26 December 1986. Therefore, technically, young Lieutenant Gatot Purwanto was a member of  Kopassandha at Balibo in 1975, and also later as Major Gatot Purwanto in Kopassandha when engaged in the 1983 ceasefire machinations.

Ernie Chamberlain is a retired Australian brigadier, having served for 36 years – including as Australian Defence Attache in Jakarta in the mid-1990s. Since retirement in 1998, he has spent some years in Timor – including advising Defence Minister Roque Rodrigues and F-FDTL commander Taur Matan Ruak on defence policy and planning (2004-05).

This entry was posted on Sunday, January 31st, 2010 at 10:44 and is filed under Research. You can follow any responses to this entry through the RSS 2.0 feed. You can skip to the end and leave a response. Pinging is currently not allowed.

4 Responses to The Two Purwantos