Cecily Gilbert and John Waddingham visited Kevin Sherlock while passing through Darwin in late June 2011 on their way to Timor-Leste. Illness has taken its toll, but we found Kevin still passionate about collecting and sharing his knowledge on Timor documentary materials.

Sad Update: Kevin Sherlock died in the Darwin Hospital Hospice on 2 October 2014. His ceaseless commitment to uncovering Timor documentation and his unfailingly generous sharing of his knowledge and materials leave a yawning gap in our collective Timor-archival lives. Vale, Kevin.

Somewhere off to the side is a kitchen and bedroom, but in this living room are tightly packed shelves of scrupulously well-ordered folders and books. This is the Darwin home of Kevin Sherlock – legendary bibliographer and collector of Timor literature.

Kevin’s living room is both library and archive and, along with its creator, a Timor research institution in its own right.  Many a Timor researcher over the past 35 years has, sooner or later, realised they should call on Kevin Sherlock’s encyclopaedic knowledge and collection for guidance on possible source materials for a myriad of Timor topics dating back to early Portuguese colonial times.

A question on sources causes an immediate twinkle in the eye and is soon followed by Kevin heading off to one or more bookshelves for an answer.  From the outset of his mission to find and collect Timor literature, Kevin has generously shared the fruits of his knowledge with all comers.

In May 2010, the State of Timor-Leste formally honoured Kevin Sherlock for his work.

Not content with simply collecting, Kevin has indexed people and place names in un-indexed publications. He has compiled from multiple sources useful research lists such as the Portuguese governors and traditional rulers in colonial Timor.

With Kevin’s permission, we make available here his 448-page 2002 Shelf List. While in need of updating (in progress), this list provides an detailed guide to his collection contents.

Kevin Sherlock’s work on Timor literature began by chance after a two-week holiday in Timor in 1974.  He began to search for Timor literature to inform his planned return holiday in 1975. His first list of sources was later seen by Jose Ramos-Horta and others who encouraged him to expand his work. The rest is history…

Employed in stationery businesses, Kevin then spent much of his holidays and spare time, along with extensive periods of unpaid leave,  finding, documenting and collecting. Retirement as an aged pensioner in 1999 meant less monetary resources for his work, but the freedom to spend most of his waking hours documenting his materials and selflessly assisting many researchers who came to his door.

A detailed account of his work, including a guide to some of the research resource material he has created, can be found here.

The question of what might become of Kevin’s collection for the longer term has been settled. Kevin has willed his collection to the Library of Charles Darwin University in Australia’s Northern Territory. There it will complement another significant Timor collection purchased from Portugal some years ago.

A small fragment of this latter collection has been digitised and is accessible online through the Library’s Arafura Digital Archive (AraDA).

Kevin has (unfortunately for us; perhaps fortunately for himself)  resisted the internet/email world, so his preferred contact method is to write to:
[Detail removed 30 March 2015. JW]

Kevin doesn’t charge for his help, but a donation towards his costs and ongoing collecting work is strongly recommended by Timor Archives. 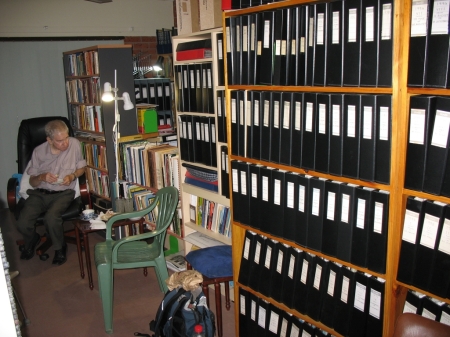 This entry was posted on Monday, July 18th, 2011 at 00:48 and is filed under Australian collections. You can follow any responses to this entry through the RSS 2.0 feed. You can skip to the end and leave a response. Pinging is currently not allowed.