CHART’s John Waddingham visited Timor-Leste in March 2016 to assess recent archival developments. In the first of several articles, he reports on continuing activity at Timor-Leste’s first but least well-known institution, the National Archive. 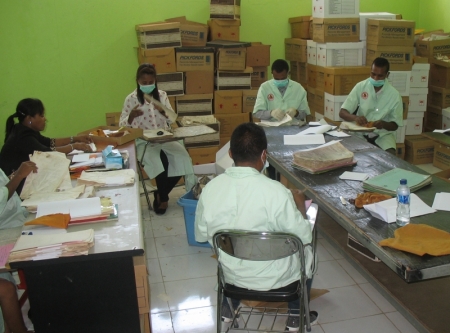 Timor-Leste’s National Archive collects and preserves the records of government and administration dating forward from the Portuguese colonial era. Observations in 2015 that the National Archive appeared to be emerging from a decade of obscurity were confirmed in March 2016. The archive is now a hive of activity and senior staff are optimistic about its immediate future development.

Compared to other archives in Timor, the Archive operates on a relatively small budget (USD$259,000 in 2016). There are indications that the current responsible Minister for State Administration, Dionisio Babo Soares, is championing the expansion of the Archive, including a significant capital injection for a new purpose-built repository.

Current activities observed at the Archive included cleaning and re-housing a very large volume of Indonesian-era administration records and conservation/repair work on fragile collection items. The latter work arises from recent training and equipment donations from the National Archive of Brazil. The Archive has also put itself more in the public eye through a display of some of its historical materials in the exhibition space at the Resistance Archive & Museum.

In addition to the Brasil connection, the Archive is establishing relationships with other National Archives, including Portugal and Indonesia. A previous connection to Australian archives – a donation of archival storage materials to the Archive in the early 2000s – has not yet been revived. However, the Australian Bureau of Meteorology equipped and trained Archive staff to scan Portuguese-era weather records to be added to international climate change data.

Collection Access
The National Archive holds an extensive collection of Portuguese-era administrative records some of which, reportedly, are not even held in official Portuguese archives. Other holdings include yet-to-be described Indonesian and United Nations administration records and an unknown volume of post-2002 Timor-Leste government materials.

The Archive does not yet appear to have formal public documentation on conditions for access but researchers have been able, on application, to access Portuguese-era records. Creation of a dedicated researcher-access room within the existing facility is planned. The large backlog of unprocessed post-Portuguese-era records means they will not be accessible to researchers in the near future.

This entry was posted on Friday, April 8th, 2016 at 11:06 and is filed under Timorese repositories. You can follow any responses to this entry through the RSS 2.0 feed. You can skip to the end and leave a response. Pinging is currently not allowed.