Australian journalist Michael Richardson’s photographs and reportage from pre-invasion Timor-Leste have a special place in the new nation’s history. We present here a large sample of his 1975 images and seek reader assistance to identify names and places for the long-term historical record. 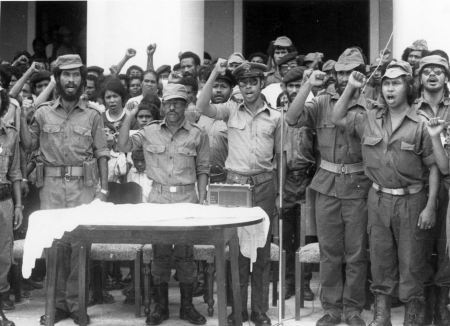 Michael Richardson, South-East Asia correspondent for The Age newspaper (Melbourne), visited Portuguese East Timor and Indonesia several times in 1974-75. From both sides of the Indonesian border in late September 1975 he reported the last days of the civil war, seeing retreating UDT leaders move into Indonesian West Timor. In November/December, he reported and photographed pre-invasion Indonesian military operations in Timor and Fretilin’s unilateral declaration of independence on 28 November 1975.

With journalist Jill Jolliffe and humanitarian aid workers, Richardson was evacuated from Dili just days before the main Indonesian invasion of 7 December 1975. His photographs are a unique and irreplaceable record of these critical moments in Timor-Leste’s pre-invasion history.

In recent years CHART and others have unsuccessfully searched for original print copies or film negatives of Richardson’s images. Requests for searches of The Age archives  have resulted in advice from Fairfax (the newspaper’s owners) that the negatives are probably lost.

CHART’s chance online discovery early this year of Michael Richardson’s Timor research papers at the ADFA/University of NSW library in Canberra opened a new avenue of inquiry. With the help of Professor Clinton Fernandes and special collections staff at the library, we were able to confirm the existence of good quality print copies of many of the journalist’s Timor photographs from late 1975.

ADFA/UNSW is now adding photographic data to their original contents-list of the broader Michael Richardson papers. In concert with the library, we present here low-resolution copies of all the photographs, along with an invitation to readers to assist identifying any content (names, places etc).

We have divided the collection into five ‘galleries’. Each ‘gallery’ is based on the original film roll number recorded on the back of each photographic print.

Click on the gallery headings below to see each print set, provisional captions and instructions on how to add information or commentary to any individual image.

Film Roll 3: Scenes from Dili & Atauro, December 1975
This sequence appears to record Richardson’s final day(s) in Dili and departure to Atauro before evacuation to Darwin. Includes portraits of individuals and unidentified pilots and Portuguese naval and military personnel.

Film Roll 4: Scenes from Dili and north coast, November 1975
Includes various buildings around Dili, a series on (Apodeti?) prisoners, Falintil troops on drill exercises. May also include some images from the Richardson, Jolliffe, Lobato journey to Atabae / Loes River area.

Film Roll X: Scenes from Indonesian West Timor, September 1975
Appears to depict refugees in West Timor and an Indonesian military parade (in Atambua?). A few images only; may be fragments from the same border area series in Roll 1 above.

Good quality ‘medium resolution’ digital copies of the images are available for download from the ADFA/UNSW library’s online guide to the Michael Richardson papers. (Note: scroll to end of the guide web page). High resolution copies are available from the library on request.

The ‘missing’ images
Sadly, not all of Richardson’s images from late 1975 are to be found in his archival collection. Some key ones are missing, including his published images of Indonesian naval ships and aircraft operating off the north coast.

For a guide to other missing known images see this collage and view CHART’s checklist of film negative numbers and physical prints.

We can only hope that, in time, the original film negatives are found at The Age and/or some of the missing prints will turn up in other personal archival collections.

Grateful thanks to ADFA/UNSW special collections staff Rose Holley and Paul Dalgleish for their ongoing work to bring these images into the public arena. Thanks to Domingos de Oliveira for helping with captions for Richardson’s September 1975 images from border zone. Also thanks to Clinton Fernandes (ADFA), Will Jones at Fairfax Media and Anya Dettman (National Library of Australia) for their assistance in tracking down the photographs.

This entry was posted on Wednesday, April 4th, 2018 at 18:44 and is filed under Australian collections. You can follow any responses to this entry through the RSS 2.0 feed. You can skip to the end and leave a response. Pinging is currently not allowed.