Hugo Fernandes, the executive director of Timor-Leste’s Centro Nasional Chega! (CNC), visited the CHART Melbourne office in late January 2019. His visit provided more insight into the work of the CNC and marked a deepening of our relationship with this new Timorese institution.

Hugo Fernandes (third from right) with CHART staff and Board members, Melbourne. 29 January 2019

CNC’s work focus will include the preservation of memory, the promotion of human rights through education and training and solidarity with the most vulnerable survivors of human rights violations in the 1974-1999 period.

CNC was established by government decree law in late 2016 and commenced operations in July 2017. CNC also succeeds CAVR by being based at the former Comarca prison in Balide, Dili.

As CNC’s inaugural director, Hugo Fernandes visited Darwin, Sydney, Melbourne and Canberra between January 23 and February 3, 2019, under the Australian Department of Foreign Affairs & Trade (DFAT) special visitors program.** With a packed schedule, he visited a broad range of cultural and advocacy organisations and institutions related to his CNC work and other responsibilities in Timor-Leste

CNC’s responsibility to preserve and provide access to the unique CAVR archive, to expand its information resources and create a dynamic centre for research and learning is of particular interest and relevance to CHART.

In September 2017, CHART and CNC signed a memorandum of understanding in which CHART agreed to provide practical and professional advice to CNC on archival matters. In October/November 2017, CHART’s John Waddingham and Cecily Gilbert conducted an onsite assessment of the CNC archive and library, making a number of recommendations to develop both functions. 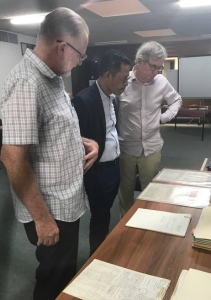 Hugo Fernandes reported to CHART members on the ongoing value to CNC of the 2017 assessment recommendations.

He also outlined a range of recent CNC memorialisation activities, including:

Mr Fernandes inspected a small exhibition of archival materials from CHART-held collections, and participated in discussions about CHART operations in Australia, our knowledge of Australian-held collections about Timor and our document digitisation program.

CHART and CNC have agreed to revise the 2017 MoU in the near future. It is expected to include transfers of digital copies of Australian-held archives and ongoing support for CNC’s archival development. We very much look forward to enhancing the relationship.

** Mr Fernandes was accompanied by the First Secretary (Political) of the Australian Embassy in Dili, Lisa Clutterham.

For an in-depth background to the establishment of Centro Nasional Chega!, see Pat Walsh’s August 2017 paper, Growing Flowers in a Prison. Pat Walsh was a key advisor to CAVR and the post-CAVR Secretariat as well as a member of the Working Group which planned the creation of CNC and a member of CNC’s international advisory group. Pat is a co-founder and current Board member of CHART.

Photographs: Thanks to Lisa Clutterham / DFAT.

This entry was posted on Friday, February 8th, 2019 at 15:09 and is filed under Australian collections, Timorese repositories. You can follow any responses to this entry through the RSS 2.0 feed. You can skip to the end and leave a response. Pinging is currently not allowed.