Indonesian video footage of the 1992 capture of East Timorese resistance leader Xanana Gusmao is the tip of an iceberg of still-secret Indonesian records about its military invasion and occupation of East Timor.

Aired on Australia’s Special Broadcasting Service program, Dateline, on 22 May 2011, the footage shows Indonesian preparations for the raid on a house in Dili where Xanana was known to be hiding, the armed raid and arrest and parts of a later exchange between Xanana and the head of the Indonesian military, General Try Sutrisno, who flew to Dili on news of the capture. The footage also shows Xanana’s belongings – including weapons and documents.

Questions arising
Several obvious questions arise from viewing this footage: What was the origin of the footage used by SBS and is other material available from that source; will this material be made available to East Timorese institutions for long-term preservation and access; given the relatively poor quality of the footage, does a better master exist; are the documents and weapons captured with Xanana still kept in Indonesia and if so, will they ever be repatriated to East Timor? 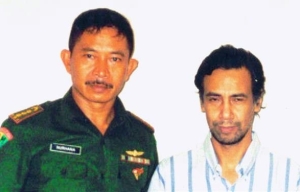 Nurhana Tirtaamijaya, an Indonesian military police commander in 1992 and Xanana’s principal interrogator, published in 2007 a personal account of his encounters with the prized political prisoner. Pak Nurhana’s account, while emphasising his claimed ‘victory’ over Xanana, also gives some insight into the sequence of events between the resistance leader’s arrest and his incarceration in Cipinang Prison.

Tapping into Indonesian records
Pak Nurhana says the story he tells was once a State top secret. Hopefully, his preparedness to tell his story publicly means other knowledgeable Indonesians may be prepared to also release their Timor information.

The task of seeking, finding and securing primary records of Indonesia’s East Timor history is large and urgent. We hope this task will be taken up by the people who can best do this – interested and concerned Indonesians.

Sources
Thanks to Ernie Chamberlain for drawing my attention to the Nurhana article and, especially, for his translation.

Thanks to Sara Niner for the use of her Xanana capture image – taken from her blog item on the topic.

This entry was posted on Monday, May 23rd, 2011 at 06:18 and is filed under Access, International collections. You can follow any responses to this entry through the RSS 2.0 feed. You can skip to the end and leave a response. Pinging is currently not allowed.